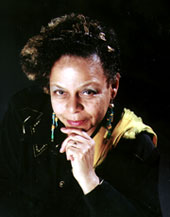 During her term as Fellow, Deverell taught a graduate course on Diversity Journalism, the first of its kind to be offered in the Graduate Program in Journalism. She also devoted time to a research project called Class, Race, Resources and Media Coverage: Katrina to Ipperwash, which was available to journalism students as an independent study course.

Rita Shelton Deverell completed her term in the fall of 2005 as Director of News and Current Affairs for APTN, the world’s first Aboriginal Peoples Television Network. Under her leadership, APTN National News launched its first daily show in 2002. While at APTN, Deverell used her widely recognized team building and daily show running skills to mentor her Aboriginal successor.

Rita Deverell is one of the founders of Vision TV, the world’s first and only multi-faith television network. There she was the winner of two Gemini Awards, founding producer and/or host-interviewer of It’s About Time, Arts Express, Sacred Feminine, Skylight, themed hosted evenings, and numerous Specials. Deverell was part of Vision’s executive management team and regulatory strategic planning from the network’s successful licencing in 1987, through its renewal and award of a subscriber fee in 1992, and in August 2000 successful applications to the CRTC for three digital channels.

Deverell sat on the Boards of Directors of Women in the Director's Chair and the Media Awareness Network; the Board of Governors Communications Committee of the Ontario College of Art and Design; and was an ad hoc Adjudicator of the Canadian Broadcast Standards Council.

Deverell to host seminar on the Ipperwash Inquiry

Dr. Rita Shelton Deverell, CanWest Fellow in Media in FIMS, will host a brief seminar on Friday, March 30, 2007 to look at the aftermath and implications of the Ipperwash Inquiry's Report and the media coverage of the Dudley George 'era' (1995-2007).

The Ipperwash Inquiry, two years in process, is to be released next month. The Inquiry's mandate was to inquire and report on events surrounding the death of Dudley George (the unarmed Aboriginal protestor who was shot in 1995 during a protest at Ipperwash Provincial Park and later died), and to make recommendations that would prevent such violence from occurring in similar circumstances in the future.

A number of distinguished guests will participate in the seminar, including:


The seminar, which is part of Deverell's ongoing research project Class, Race, Resources and Media Coverage: Katrina to Ipperwash, is sponsored by J791 Diversity Journalism and the CanWest Global Fellow.