Surviving Memory in Postwar El Salvador, an international research partnership led by project director and FIMS professor Amanda Grzyb, has received $2.5 million in research funding over the next seven years through a Partnership Grant from the Social Sciences and Humanities Research Council of Canada (SSHRC). A large, multidisciplinary project including 22 partners and more than 40 individual collaborators, this research initiative is dedicated to documenting the history of the Salvadoran Civil War (1980-1992) and preventing future violence, while encouraging the important and impactful processes of intergenerational education, and commemoration in solidarity with Salvadorans.

"This new funding will allow us to build on the successes of our previous SSHRC-funded pilot projects and significantly expand the scale and scope of our collaborative research in El Salvador and with the Salvadorian-Canadian diaspora," says Grzyb. 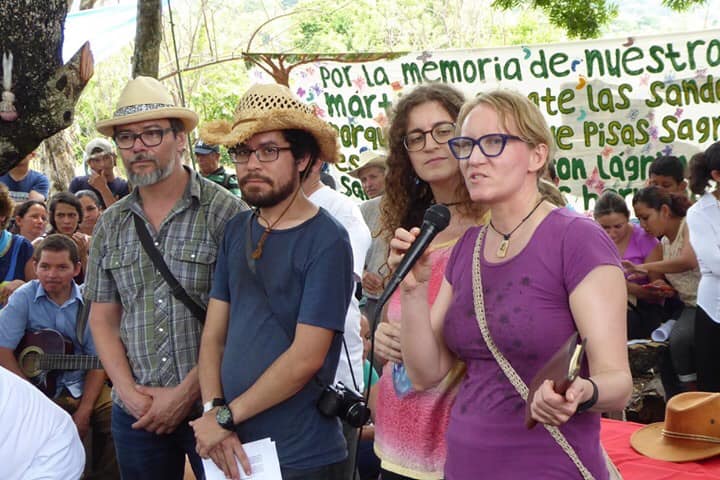 During the 1993 Commission on the Truth for El Salvador, the United Nations received 22,000 complaints of 'serious acts of violence' committed during the twelve years of the Salvadoran Civil War (1980-1992). Of these complaints, 85% were attributed to the United States-backed Salvadoran government army, which perpetrated atrocities against its own people.

Surviving Memory and its partnership of survivors, scholars, artists, lawyers, archivists, museums, architects, engineers, community organizers, municipal governments, civil society organizations and mental health professionals, works in solidarity with war-affected communities in El Salvador to realize the still neglected recommendations of the Truth Commission, including documentation, memorialization, restorative justice, and reconciliation. Using decolonial and participatory methodologies - such as memory workshops in which former refugees, massacre survivors, and their younger relatives share their wartime experiences and testimonies - the team aims to amplify the voices of survivors.

"One of the recommendations in the Truth Commission focuses on the importance of commemoration. The act of commemoration is extremely important both for fortifying the community memory of the event and documenting the truth about the history of the war. It can also serve as a kind of restorative justice for Salvadoran communities, and I think it is a really important step in post-war reconciliation," explains project director Grzyb.

With the newly awarded SSHRC funding, the Surviving Memory research team will expand upon these memory workshops and their other artistic, educational and documentational projects - including working with survivors to identify and map massacre sites in El Salvador, the creation of public art projects, public memorials and documentary films.

As a FIMS scholar, Grzyb has done extensive research on the documentation of genocide, massacres, and other forms of state violence and human rights violations, and she is well-versed in the consensus-based governance, participatory methodologies, and strategic communications needed to lead this large interdisciplinary and cross-sectoral team.

"FIMS is a natural fit for this kind of interdisciplinary, collaborative project because of the way our faculty supports community-engaged scholarship, public-facing outcomes, and creative collaborations," says Grzyb. "My colleagues at FIMS have inspired the social justice orientation of my own teaching and research, which is reflected in the solidary ways that our team works with war-affected Salvadoran communities."