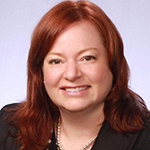 Dana James received her MLIS degree from Western in 2001.  She has a BA Honors in English from Dalhousie University.  Prior to taking on the role of Associate VP, Principal Gifts at Western, Dana worked at Robarts Research Institute, Mount Sinai Hospital Foundation Toronto, and the Richard Ivey School of Business.


Q: What sticks out in your mind about your time in the MLIS program?

A: It was really after the program that I truly came to understand how much I had learned, and how well it had equipped me for success. At the time the workload was probably the thing that I focused on, but in the years since I graduated I have been struck often with how broadly applicable my education is.

Q: Is there a faculty, staff member or other student that you'll always remember?

A: The other students in the program had a big impact on me. Through them I learned what the career opportunities were in the field. It was classmate - Stephanie Baschiera, now Associate Registrar and Graduate Secretary at McMaster - who introduced me to prospect research. She was a prospect researcher at McMaster University then, and she spoke so passionately about her work that it inspired me to explore the field myself. At that time prospect research wasn't a course offering, so it was exposure to students working in the field that opened that opportunity for me. Also, Carole Farber, Bernd Frohmann, and Sam Trosow were great professors from whom I learned a lot.

Q: What was your first job out of the MLIS program?  How did it go?

A: My first job on graduation from MLIS was as a prospect researcher at Robarts Research Institute. It was fabulous. Working in a medical discovery environment was exciting. I have no science background at all, but suddenly I was learning about science, how it's conducted and how it's funded, from the most brilliant scientists themselves. My job gave me a place in that world, a way to contribute.

Q: How did you get into Development?

A: When I joined Robarts the development operation was small, but growing. As we expanded, the skills I developed in the MLIS program gave me the opportunity to take on new roles within the department - I found there were lots of different ways I could contribute. If there was a job that needed doing, I offered to do it - from cleaning up the database and reorganizing the intranet, to the development of systems and processes to support fundraising activity, to writing funding proposals, to helping host events and giving tours of the facility.  At the same time as I was learning everything I could about the development operation, and I was learning everything I could about the organization broadly - about the science and scientists.  Eventually those two things came together, and it seemed natural that I would move into more of a front line fundraising role. I was also fortunate to work in an environment that supported that kind of growth and learning.

Q: Why does Development and Fundraising interest you?

A: There is tremendous satisfaction in facilitating the connection between donors and meaningful projects that need their support. Donors to Western’s Be Extraordinary fundraising campaign for example, invest in awards and programs that enhance the student experience, attracting and retaining great faculty, research that drives discoveries that will improve our lives, and facilities that make Western University a great place to learn and work. It's exciting to be part of something so positive, and I'm inspired every day by the faculty, students, volunteers, donors and staff I work with.

Q: What are your plans for the first couple of years in your new position as AVP Principal Gifts?

A: My role as AVP Principal Gifts is to work with staff, faculty, volunteers and donors on principal gifts to support Western's Be Extraordinary fundraising campaign. Our goal is to raise $750 million in support of leadership, discovery and learning at Western. Supporters, friends and alumni have contributed approximately $500 million so far.  Working with the team to raise next $250 million should keep me busy for the next little while!

Q: What career advice would you have for our current MLIS students?

A: I have found that where I have looked to add value, opportunity has followed. The skills you gain in the MLIS are widely applicable. Don't be limited by your job description. It's also more than just asking is there anything else I can do. It's understanding enough about your organization to identify areas where your specific skill set will make a difference and selling your ability to do so.  When you help people do their work more effectively, they will involve you in more projects. The more projects you are involved in, the more you will learn more about your organization, and the more opportunities will open up.