Do you love to build, create, tinker and be curious about the world around you?  Then you’re a maker.

That was one of several messages from the DHMakerBus crew, who were invited by the Graduate Resource Centre to visit campus on Thursday in their big, blue bus.

And the bus was indeed blue – a bright beacon of creativity and imagination, parked in Middlesex College parking lot over lunch on Thursday, October 9.  The term “makerspace” is something that only seems to have recently crept into our vocabulary.  If you’re not sure what it means, you’re probably not alone.

“A makerspace is somewhere that people get together to work on projects, create, re-cycle, or solve problems using a set of shared tools,” explained MakerBus co-founder, and LIS PhD student, Kim Martin.

“These tools range from anything as simple as sewing needles and hammers to 3-D printers and laser cutters. Members of a makerspace usually pay a small monthly fee to have 24 hour access to the space and the tools available there.”

Martin said that while they do have regular members, their MakerBus is really intended to be a public makerspace designed to get as many people engaged as possible.  In that spirit, they take the bus and equipment around the city to hold classes and run workshops.

They offer programs, sessions and training that can be booked by interested citizens.  For example, they might hold a “break day,” where people spend the day taking things apart and collaboratively learning about them that way.

Thursday saw staff and students touring through the bus, checking out its various projects and devices.  Ryan Hunt was on hand, to demonstrate some of their work. 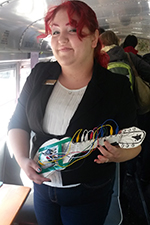 Upon spending time on the bus, MLIS student Christine Pinkney seemed impressed by what she’d seen.

“I feel like makerspace in general has encouraged me to go to the Dollar Store and spend $5.00 and get tons of stuff and take it apart and see how it works,” she said.

The bus has its own story.  Some years ago, Martin, and her MakerBus co-founders Beth Compton, a PhD Archaeology student, and Ryan Hunt, an MA in history grad, were eager to attend a digital humanities conference in Nebraska.

When they looked at renting a bus for the trip, they found the $10,000 price tag far too steep.  Someone jokingly said it would be cheaper to buy a bus, and Martin’s ears perked up.  She said that one Indiegogo crowdfunding project later, and she was able to purchase the $1,900 bus from a scrap yard.

The big, blue bus never did make it to Nebraska, but the team had new plans for it.  She said that she and her friends were looking for a way to give back to the community.  Inspired by the maker movement, they filled the bus full of equipment – partially outfitted with materials from their own homes – and the DHMakerBus was born.

“I got into making through founding the bus, and have since become interested in the possibilities it holds for education of both children and adults. I also like that it helps people to consume less, create more, and think about the impact that their consumption is having,” said Martin.

The makerspace concept has been developing over time – it’s officially termed the Maker Movement – and is starting to appeal to wider audiences.  Martin noted that increasing interest in the MakerBus’ services means they are always looking for new volunteers, particularly people with specialized skills in making stuff.

One area of growth is in public and academic libraries, which are starting to take an interest in and support maker spaces.  Martin noted that she and her team recently held a training session for a group of librarians who are interested in initiating their own maker project.

Marni Harrington, FIMS Librarian, was on-hand for the tour, and has watched Martin and the MakerBus progress.  She noted that Master of Library & Information Science students are uniquely positioned to spearhead the maker movement and that libraries will be looking to new grads to “create, program, and maintain these spaces.”

As for how big the Movement can ultimately grow, Martin isn’t sure yet.

“I'm not sure what the future holds, though it’s gaining ground in schools, libraries, museums, etc. I think it brings people together in a way that they might not normally interact, and would love to see this extend into everyday practice that is just supplemented by physical spaces, but I can't yet envision how that might happen.”

Interesting info about the MakerBus team:
-    The DH in DHMakerBus stands for Digital Humanities
-    Martin’s Indiegogo campaign raised a total of $3,200
-    Martin, Compton and Hunt first met each other on Twitter
-    The blue bus has seen healthier days – it can only be used during the warm months and is temporarily retired in the winter.  Programs continue, however
-    There are two other makerspaces in London - 121 Studios and UnLab.