In partnership with the Centre for the Study of Theory and Criticism (CSTC), the Faculty of Information and Media Studies (FIMS) was very pleased to host an international conference, “Apps & Affect.” Taking place in the heart of the downtown at Museum London, from the 18th to the 20th of October 2013, the conference attracted over 70 scholars from around the world, featuring 17 panels, seven plenary papers, a workshop on building Apps, and a special panel highlighting educational apps developed here at Western’s CulturePlex Lab. The conference also hosted a traveling international art exhibition, “The Imaginary App,” dealing with the graphic and design elements of mobile computing. With all conference events open to both the campus and community, and with video coverage of each plenary talk soon to be available on our website, “Apps & Affect” presented Canadian academia at its most intellectually audacious, publicly engaged, technologically advanced, and culturally inventive.

“Apps”—software applications for mobile communications devices—offer themselves as channels navigating uncanny media networks, shortcuts guaranteeing immediate access to what we need beyond the screen.  This conference explored such promises by connecting “apps” with “affect”—that is, excitements and depressions running beneath and beyond conscious cognition. The primary goal of this event was to carve new spaces, within and beyond the university, to accommodate a variety of multidisciplinary perspectives on the expectations we have, the risks we encounter, and the changes we experience as users and consumers of mobile apps.

The conference began on the morning of Friday, October 18th, with opening remarks by Nick Dyer-Witheford (Acting Dean of FIMS), Christopher Keep (Acting Director of the CTSC), and Ashley Conyngham (on behalf of the London Economic Development Corporation). 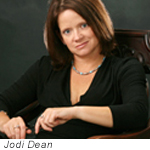 With participants assembled in Museum London’s lecture theatre, Jodi Dean’s keynote speech, “Affective Collectivity: Apps and Drive,” got the conference off to a spirited start with a compelling critique of the emotive qualities of the "app economy." Apps, for Dean, should be understood from the perspective of the psychoanalytic concept of the drive, which can in turn be re-interpreted as a category critical to the understanding of contemporary “communicative capital.” Sessions to follow featured papers on gamification, commodification, music, museums, health, intimacy, parenting, running, and a practice-based workshop by Paul Caplan, which afforded participants the opportunity to build an app while exploring key issues and tensions within the “app economy.”  Members of Western’s CulturePlex also led us through a discussion of the Lab’s development and implementation of Zap Learning, a tool that brings together the open potentialities of the web with the constant usage of smart phones in the classroom. The first day came to a close with a talk by Paul D. Miller (aka DJ Spooky), who spoke about the switch to cloud computing by means of introducing his collection of essays from the prestigious MIT Press, The Imaginary App, co-edited with conference organizer Svitlana Matviyenko and featuring contributions by numerous participants. 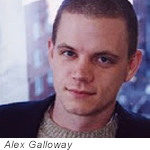 Saturday’s events got underway with Alex Galloway’s remarkable keynote paper, “Three Middles: Mediation in Networks,” which deftly combined his scholarly expertise in literary and media theory to offer an enlightening talk on three forms of media based on ancient Greek figures of mediation: Hermes (interpretive / duplicitous mediation), Iris (illuminatory mediation), and the Furies (infuriated mediation). Morning sessions to follow addressed a range of questions related to new platforms, technologies, desires, and relationalities that have opened up in light of the explosion of activity around app development. 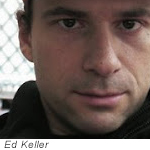 For our second keynote address of the day, Ed Keller presented his paper, entitled “Post-Planetary Sublime: Science Fiction and Apps,” which weaved together posthumanist theories, popular and avant-garde science fiction film criticism, and techno-scientific analysis. Keller hypothesized that human beings, from both the macro- and micro-perspectives of deep time and space, could be conceptualized as apps for geo-cosmic processes and agencies. Following Keller’s plenary address, panels resumed on a range of questions, from the idea of digital ghettos and frontiers, to various perspectives on the “app economy,” to the aesthetics of the app. 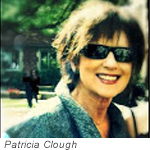 To conclude the second day of the conference, Patricia Clough offered her plenary address, “The Philosophical Carpentry of the App,” engaging with object-oriented ontology in response to concerns about “dangerously obscuring human knowing” by means of blackboxing. Clough’s presentation also drew on the work she has been doing with several students at the CUNY Graduate Center that they have defined as “the datalogical turn.” Clough and her collaborators suggest that the world has already become a “big data world,” where social media, mobile technologies, and cloud computing have been married to the “unbounded, promiscuous, and indiscriminate” capacities of nanotechnology, biotechnology, and sensor technology. 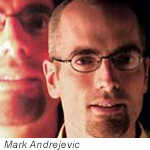 The conference reconvened on Sunday morning, beginning with Mark Andrejevic’s plenary paper, “Auto-Affect: Technologies of Self-Regulation in the App Economy.” Andrejevic addressed new forms and impacts of affective computing, or rather, those devices and controls that claim to be able to read human emotions and intentions directly off the signs of the body, bypassing consciousness entirely. Using the drone as the paradigmatic example of the interface between technology and human intentionality, Andrejevic took the audience through a chilling list of examples of these new forms of “affective” monitoring and assessment. The sessions to follow drew critical attention to the impact of new mobile technologies, including questions related to digital labour and consumption, tracking and surveillance, identity, trauma and therapy, and future media. 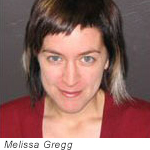 Melissa Gregg concluded the day with “Hack for Good or Else”—one of the most disquieting and challenging talks the conference. She addressed the way in which, even as Chelsea Manning, Julian Assange and Edmund Snowden are demonized as public enemies, “hacking” and “hacktivism” are being re-appropriated, in a domesticated version, by the Obama administration and major US information corporations. Gregg described her own experiences in an Intel-organized “hackathon” in Los Angeles, where volunteers are invited to donate their digital skills in order to make volunteer contributions to maintain the city’s disintegrating urban infrastructure.

No conference would be possible without the help of dedicated volunteers, and we would like to thank each of the graduate students and members of the FIMS staff who helped to make this event a success. The conference organizers would also like to thank the tireless efforts of our technical support staff, Matt Ward and Charlotte McClellan; Nida Siddiqui and Brent Boles for their videography, as well as our partners at Museum London. Finally, we would like to thank our partners and sponsors who made this event possible, including The Faculty of Information and Media Studies, The Centre for the Study of Theory and Criticism, the Social Sciences and Humanities Research Council of Canada, and the London Economic Development Corporation.