People are often quick to offer donations of various kinds when there is an identified need for a person, family or group. It’s not uncommon to come across news articles that mention an influx of donations of things like clothing, food, household items or toys after a crisis or other event.

But rarely discussed are the logistics and organization that go into processing large donations of any sort. Whether it’s a clothing and toy drive after a natural disaster, or the donation of an art collection as part of an estate, someone needs to catalogue and organize the items and make decisions about what happens to them next.

This summer, two Master of Library & Information Science students in the Faculty of Information & Media Studies were able to gain first-hand experience with this type of work when a large donation of books from the campus preschool was made to a local Syrian refugee family sponsored through the Social Science Refugee Sponsorship group.

Knowing that hundreds of books would be overwhelming for any one family to sort through, Marni Harrington, FIMS librarian and member of the sponsorship group, accepted the books for a student project in the Graduate Resource Centre library.

Graduate Resource Centre library student assistants Cody Vanderslot and Arielle Vanderschans were key players in completing all the requisite work to get the books ready for distribution.

“There were 22 boxes of books in varying conditions, this equaled more than 1700 books!” Says Arielle, noting that the intent was to donate some of the books to the Syrian refugee family sponsored through the sponsorship group, and give the rest to a London elementary school with a large refugee population.

“The first step though was to figure out what we had, and what condition it was in.”

Arielle explains the project as a series of phases, which began with the creation of a workflow and a spreadsheet to keep track of the title, author, illustrator, publisher, year and condition of each book. This part of the project took the first half of the summer semester.

“At first it seemed listing so many things might not be necessary but when it came to tracking down a certain book later, it was important to be able to say it was this Green Eggs and Ham not the other copy,” she says.

Co-worker Cody says this initial set of tasks was valuable experience in that it gave him the chance to practice lessons learned in the classroom. He cites the collections management and cataloging courses as examples of applicable courses.

“I can use the skills I learned on future weeding projects, when organizing a collection, or even when recommending books for children. I became familiar with some prominent children’s authors and publishers – scholastic publishes a lot of children’s books,” he says.

The next step was to repair any books that needed it. Wherever possible, book repair was completed in house by Arielle and Cody, with the help of GRC library assistant Steve Patterson.

The final phase of the project involved sorting the 1700+ books into usable categories.

“We sorted by reading grade level. Pre K, K, grade 1, 2, 3 and 4+,” explains Arielle. “Once everything was sorted and boxed it was time to bring it to the elementary school. The teachers were thrilled to see so many books coming in and it was very well received."

Cody, who has a specific interest in public librarianship and a background in Child and Youth Studies, points out that public outreach and engaging community partners is frequently discussed in the MLIS program, and that schools make great partners.

“When the teachers at the school found out they were going to receive a large donation of books they were really excited and grateful. Knowing that the books we prepared for them will be used to help children and families learn a new language and develop those essential literacy skills is a good feeling,” he says.

Marni Harrington says she hopes that the breadth of skills necessary to work on a project of this scope will not only help the students to learn how to deal with workflow and spreadsheets - but also improve their overall project management skills.

“Decisions had to be made about what items should be kept, repaired, or discarded,” she says. “They also learned about the critical questions that need to be asked when working with a donated collection. It definitely gave them a chance to use the theory they learned in the classroom and apply it in a real-life situation.”

Ultimately, the skills developed throughout this project will help Arielle and Cody once they’re ready to begin their professional careers. The specific skills they practiced, along with the less tangible soft skills that are critical to collaborative team work and project management, will be important moving forward. 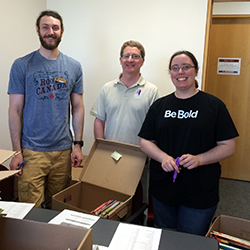 Cody says he particularly appreciated the collaboration, and that working with Arielle, Steve Patterson and Marni Harrington were key to getting it done right.

“Working together with colleagues is something I think a lot of employers are looking for so I was happy to work with them. It was also a huge project and I would have never finished by myself. It was really a team effort that went into the project.”

Arielle concludes that while the project wasn’t without its trials and frustrations, the learning experience was worth it, and ultimately the end result was a win for all parties involved.

“There were a few hiccups along the way but being able to determine what steps to take and the most efficient way of doing something was definitely something I hadn’t experienced in a library setting before,” she says. “I also love the impact it made. Knowing that the school was overjoyed to receive it and knowing that it will also benefit the refugee families is great. It’s wonderful to see firsthand what our efforts do.”