After a comprehensive design and space planning process, construction on the new FIMS/Nursing building began on February 9, 2015.  The construction team started raising the steel girder framework in late May, and foundations are expected to be complete by the end of July. 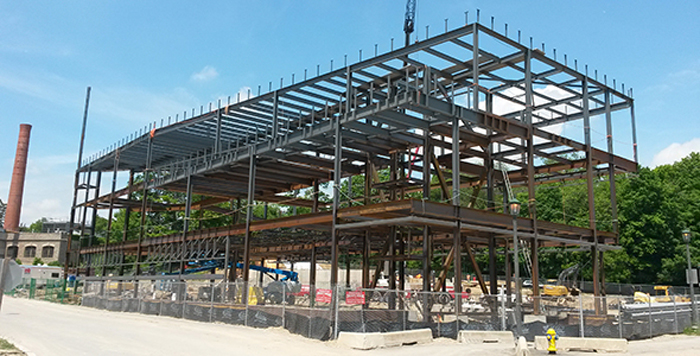 Some Interesting Features of the Building

The building will meet the efficiency standards defined within LEED guidelines (Leadership in Energy and Environmental Design).  Although not LEED certified, the infrastructure is designed to meet Canadian Green Building Council's high performance standards. Targeting building efficiencies has helped Western reduce its Greenhouse Gas Inventory by more than 11% since 2009, even as the campus continues to grow.

The overhanging section is one of many appealing features of the exterior. The floating effect of the second floor is created using two massive trusses, similar to the framework used in the Support Services Building bridge on the other side of campus. Huron/Lambton Drive is a busy intersection and the structure will provide a dramatic presence at the southwest corner.

The façade has two notable traits.  First, the exterior reflects the Collegiate Gothic style synonymous with campus. This is achieved, in part, with the use of rough-cut stone exterior and low-rise (less than three stories) architecture. Second, the two jutting wings of the building act to blend in with the preexisting Health Sciences Building next door. 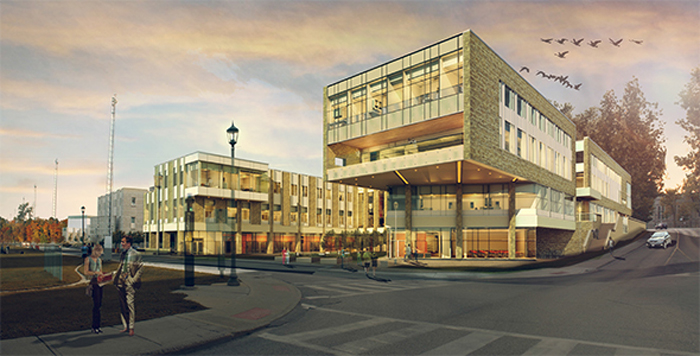 The south wing (Nursing) is a combination of styles taken from the Health Science Building on one side, and the north wing (FIMS) on the other.  The three structures form a progression as you head north along Huron Drive.

Common areas continue to be a priority in space planning. There are several communal gathering areas in the building, such as the north wing atrium featuring a naturally lit, comfortable space with high ceilings.

There will be two learning labs, similar to the WALS classroom in University Community Centre. They will feature enhanced technology and dispersed, small group learning pods.  The spaces have built-in flexibility to allow for various teaching styles and methods.

A series of flat-floored (as opposed to auditorium, raised floors) general use classrooms have the flexibility to be converted into more specific space as needs change.  FIMS will have access to roughly 10,000 square feet of growth space. 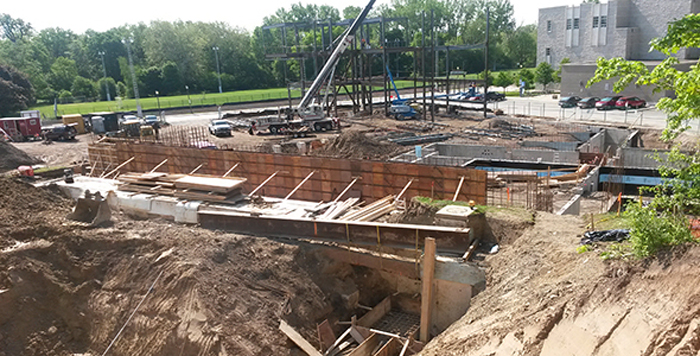