Within the cozy and secure confines of the Western University campus in Canada, research of all kinds can generally be conducted free of fear and physical threat. It’s easy to forget that this isn’t the case in other parts of the world. 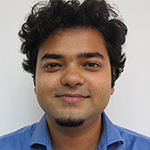 Saumava Mitra, Media Studies PhD student, had numerous reasons to keep this in mind when he delved into a recent trip to Kabul, Afghanistan, to gather interview data for his dissertation work in the Faculty of Media and Information Studies.

In an area still largely affected by frequent violence and security threats from the Taliban, Mitra needed to take special care to protect the people that he worked with in Kabul. With his research centering on the work of local photojournalists, he was keenly aware that the wrong move could put people in danger.

“The people at more risk than me, only because I can leave and they cannot, are the people I interviewed,” he explains. “Different threats loom large on the photojournalist community in Afghanistan, only one of which is the Taliban, who are of course opposed to images and western news organizations equally.”

“The ultimate aim is to see whether the cultural mind-sets of these journalists are reflected in the images they produce or if professional rigors and international news-frames dictate their image choice to the extent that their own cultural understanding of their subject plays no part,” he says. “In short, do their editors sitting in London or New York call the shots after all, or are they able to tell stories of their own places?”

Mitra found he was received warmly by the local community, and despite the risks, found many people willing to help him accomplish his goals. He has traveled the world fairly extensively, and says the people he met in Kabul were among the kindest and most welcoming he has met anywhere.

Comparatively speaking, Mitra describes everyday life in Kabul as generally calm.  But that is measured by a different standard than what we see in Canada. During his month-long visit, he says that there were eight separate suicide attacks. Continuous threats to personal security, as well as long-term political and economic instability, create a daily life that many Canadians would find tough to imagine.

“People seemed to shrug and go on with their lives,” says Mitra. “But there would be these awkward silences of about 30 seconds when we heard an explosion or gunfire.  With that many guns around in the hands of security personnel, the police, the Afghan national army, the international coalition troops and even ordinary people, some of them are bound to go off from time to time. The underlying stress seemed to be more visible in those moments in the faces of the people I met.”

To maintain his own safety, Mitra made sure that he was well connected before he went on the trip. For the duration, he was hosted by the Afghan Journalists Safety Committee (AJSC), who provided assistance and advice. Since they understood what he was researching, they helped him to make contact with potential interviewees.

He says he stayed in a secure and fortified safe-house managed by a risk and security service provider called SEPAR International, which works mostly with media teams from abroad. They also provided advice on things like traveling safely around the city.

In terms of traveling safely and efficiently, Mitra needed all the help he could get, as he packed a large amount of work into a short visit.

In one month, he needed to contact and interview 20 people for his research. He also agreed to teach a two-day workshop for AJSC staff in research methods – something which he says went well and on which he received positive feedback.

In the process of doing his primary research, Mitra says he also became interested in the images being published by local media outlets and on social media forums, and initiated an additional project looking into the nature of indigenous visual coverage of Afghanistan. That has resulted in a new collaboration with AJSC and the Afghanistan Research and Evaluation Unit (an independent research group based in Kabul).

Asked what sparked his interest in researching photojournalism in Afghanistan, Mitra, who is from India, says that the differences between his personal experience of the country, and what is projected on the world stage through photographs, inspired him to look more closely.

“I grew up a doorstep away from Afghanistan, and so when the whole world came to know the Afghanistan of the Taliban era through images of the empty hole where the Buddhas of Bamiyan once stood, or as the place where women are covered in blue burqas, I knew a different Afghanistan from the literature of my mother tongue Bengali and also from the Afghan people who have been coming to my home city, Calcutta, for centuries.”

Mitra further notes that Afghanistan is particularly interesting because of the Taliban-imposed ban on any kind of photography, which lasted for many years. He explains that images began flowing again in 2001, after international intervention in the country, but that the majority were taken by non-Afghan photographers.

Since then, he says a significant number of Afghans have battled tough odds to become professional photojournalists, working for international media organizations.

“I was sure their viewpoints would be important to capture, not to mention interesting. It turned out I was correct in that regard.”

Now that he’s back in Canada, Mitra continues to assess the data he collected through his interviews. He says his next step is to conduct a study comparing visual reportage by Afghan and non-Afghan photojournalists, which he will begin once he has completed his comprehensive exams.

After working 14-hour days for a full month to accomplish his research goals while on his trip, Mitra says he’s extremely happy that things went so well. The trip has been on his mind for some time, so completing it is a great sense of accomplishment.

“I have been making plans to go to Afghanistan and to do this research project for around five years now,” he says. “I am happy I was able to complete what I had been dreaming of for five years.”